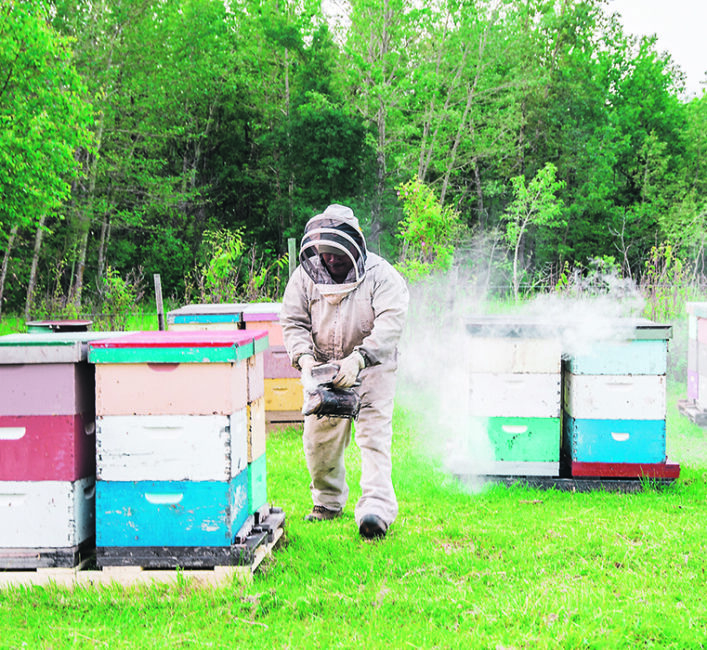 Bees were forced to find other food sources this summer, like weeds, which could change the color and taste of honey

Heat waves and drought that decimated crops like canola this summer have likely led to a drop in honey production of up to 30 percent in Alberta, according to an industry leader.

The harsh conditions even affected the appearance of the honey, said Connie Phillips, executive director of the Alberta Beekeepers Commission. The bees have been forced to feed on wildflowers and weeds such as goldenrod which are generally more resistant to extreme weather conditions, she said.

The insects lived on nectar and pollen from “whatever grew in ditches, along roadsides, beside farmers’ fields – these types of plants … all honey, depending on where it comes from, has unique flavors, but I have not yet had the opportunity to taste this new season.

Over 40 percent of the Canadian honey industry is based in Alberta, which produces about 18.6 million kilograms in a good year. The 2018 harvest was valued by Statistics Canada at around $ 64 million in gross economic benefits, not including an additional $ 3 million in sales of beeswax and pollen.

Although production in central Alberta was generally slightly below average this year, conditions were much drier in areas such as the north of the province, Phillips said.

“We were starting to hear more around mid-July that there were going to be issues with the forage.”

The industry’s problems were further compounded by the smoke from the wildfires that blanketed much of Alberta. The smoke is used by beekeepers to soothe insects, making them less active.

As a result, honey production likely fell 20 to 30 percent in 2021, making it the third consecutive season of below-average totals in Alberta. Phillips said the lack of supply had pushed prices up from $ 2.75 to $ 3 a pound, “which is more than double what it was two years ago.”

The situation could further open the door to foreign honey competition among consumers seeking to minimize their grocery bills, she said.

Phillips estimated that about 75 percent of Alberta’s honey is typically created by bees foraging on canola, “and it’s usually very white and very clear… it’s pure honey of very high quality, and therefore it is comparable to honey of equal quality from anywhere in the world. “

However, she said unusually high temperatures and drought this summer have prevented canola plants from producing nectar and pollen in much of the province.

“And then (the bees) were also feeding on alfalfa, and this year there was no second cut for alfalfa just because of the heat.”

The hot weather has even affected canola in areas like southern Alberta where these crops are irrigated, she added.

Environment Canada said a heated dome set new records for maximum daily temperature between 30 ° C and 30 ° C in 45 communities in Alberta on June 30, surpassing 40 ° C in four others.

While it’s hard to say if the different look and taste of much of this year’s honey will impact sales, Phillips said, “I generally think it won’t be a problem. “

For more content related to drought management, visit Dry weather, where you can find a collection of stories from our family of publications as well as links to external resources to support your decisions in these difficult times.

Festive ideas for your Christmas cheese board | New