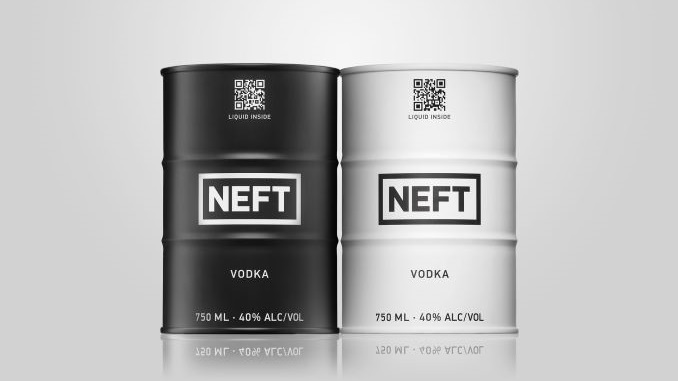 Four last minute gift ideas for the drinker in your life

Christmas is almost here, and if you’re like me, you might be hard pressed to find the right gift for all the drinkers in your life. Whether it’s a sibling, relative, friend, or coworker, alcohol can be a great gift, and it’s pretty easy to find quickly. All you need to do is go to your local packie, liquor store, or ABC store and find the right juice for that special someone. If you’re looking for some suggestions, we’ve got a few for you today, across a variety of different liquors. Not all of these products are sold in all states, and you obviously have to be 21 to pick some up, but if you find yourself walking down the aisle of your liquor store with just two days until the big day and spot one of them on the shelf, you can be sure they would make great gifts.

You’ll know if you’ve seen NEFT Vodka on the shelves at your local liquor store – it’s the vodka that comes in a small metal barrel. It’s also a vodka from Austria, so there are at least a few unusual things. This container keeps the sweet nectar cool for several hours (up to six, according to NEFT itself, and the barrel arrived cold in the packaging that was shipped to me), and has the added benefit of having looks pretty amazing. It will certainly make a unique figure in your liquor cabinet.

Of course, it’s the vodka that matters, not what it goes into, and luckily NEFT kept that in mind when preparing their recipe. NEFT boasts of its pristine alpine water from Austria, the four German rye grains that compose it and its triple distillation process, and for good reason: it is a unique and tasty vodka with a profile interesting enough to drink straight away. . Vodka is as much a topic of conversation as the barrel it enters, sinking smoothly and yet with a vibrant taste that lasts on the tongue. It’s great as a blender, of course, but NEFT is a vodka worth sipping on its own.

NEFT has won its fair share of accolades and medals in the alcohol world, so it’s clearly more interesting than cool packaging. It’s a good mid-priced option (expect around $ 35 for that 750ml barrel) if you’re looking for something that can be enjoyed straight or mixed, or if you want to impress with a liquor that comes in a distinctive container.

If vodka isn’t the gift for you, consider something from Redemption’s line of rye whiskeys. The new Redemption Cognac Cask Finish is the result of the High Rye Bourbon de Redemption finish sourced from MGP in Pierre Ferrand Cognac barrels for one year. This gives it a unique and complex flavor, with a deeper expression of the kind of earthy, autumnal notes I look for in a good whiskey. It reminds me of nuts, leather, and important men sitting stoically at large wooden desks. You know, whiskey things, only with that underlying cognac stream on the finish that makes it even more dignified – as if that was an important element French man sitting stoically at a large wooden desk.

I usually mix my whiskey with a spicy ginger ale (Red Rock is my favorite) and aromatic bitters. I clearly wouldn’t do that with it, though. It’s definitely a sip drink for me, with a robust flavor that doesn’t always pair well with others. It doesn’t need a blender, but works well in something as simple as an old one. The sugar softens this sweet bite without obscuring or cutting off the taste of the brandy. But it’s such a strong and pleasant flavor in itself that it’s best to enjoy it neat, perhaps with a glass of water on the side if you absolutely need a hunter.

Pretty much all alcoholic drinks are an acquired taste, and for me, this is most true with gin. I couldn’t drink gin when I was younger. It is my wife’s drink of choice, however, and so I slowly developed a liking for it over many years as I finished her half-consumed drinks. It’s still not the first thing I order, but after tasting two gins from Vermont’s Barr Hill Gin, it maybe went up a row or two.

The Barr Hill’s gift set includes 375ml bottles of two different gins. Both are made with honey, which helps reduce the somewhat medicinal taste that I often find in gin. Standard Barr Hill Gin mixes its herbs with raw honey, while Tom Cat Gin then ages it in oak barrels. I found the Tom Cat to be a bit more palatable – the honey helps balance the juniper in the Barr Hill bottle, but the barrel aging gives the Tom Cat a rounder, more distinctive and fully developed flavor. You get both in the gift box, of course, which makes it easy to compare and contrast. It also comes with a pound of raw honey that Barr Hill uses in his gins, which makes this set a bit more useful than most liquor gifts.

I would be remiss if this list didn’t include a rum, my go-to drink in recent years. Normally I take it down with Diet Coke and lime juice, or in a variety of tiki drinks (look, I have to do Something with all those Trader Sam’s mugs), but every now and then it’s refreshing to drink it straight. This made Diplomatico Reserva Exclusiva one of my must-haves for a while. While Venezuelan rum works well in a drink, it’s great to sip on, sinking gently and gently right out of a glass. And if you want to mix it up, it works well in (and class) almost any rum cocktail you can think of.

A bottle of Diplomatico Reserva Exclusiva always makes a nice gift, especially when included in the official Diplomatico gift box. This gives you a 750ml bottle with two glasses, and will typically cost between $ 35 and $ 40. This is a great deal for anyone who enjoys good rum and the glasses it can be drunk from.

Of course, almost any alcohol will make a gift warmly welcomed by a serious drinker. These four options are only suggestions. If you know your drinker’s tastes and preferences, you already know what to get them. Good luck and a good drink!


Editor-in-chief Garrett Martin writes about video games, comedy, travel, theme parks, wrestling, and whatever gets in his way. He’s also on Twitter @grmartin.

11 alcoholic cocktail ideas from TikTok, perfect for a dry January

New Year’s Eve food and dinner ideas, according to TikTok